TODAY I THINK I SHALL RIDE A TRACTOR... 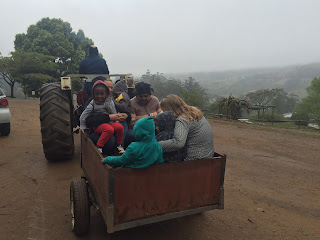 "Animals are such agreeable friends - they ask no questions; they pass no criticisms." George Eliot 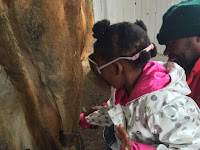 With trepidation she held out her hand and offered up what was left of the feed. The rough, wet tongue responded greedily, quickly devouring every last morsel. The light had made it difficult for her to orientate herself in this strange new environment - unfamiliar smells and sounds bombarded her senses as she searched her memory for any sort of sensory connection. It had been very cold and wet when they arrived: the mud had squelched underfoot. The serenity had been instantly disrupted by the loud bleating of a resident farmyard friend. The sound simultaneously thrilled and terrified her. It was going to be hard to be brave if the farmyard friends insisted on shouting so loudly.
Uncle Jon had explained that the noisy resident was an animal called a goat.
And then there was the accompanying smell - strong, pungent, completely removed from anything she had smelled before. With cautious process, Lusanda recognised that this very same smell was now tickling her delicate nostrils. It didn't belong to the sheep - she had the odour of wet fur and warm fireplaces. It couldn't be the cow - she was still in the milking shed. And the little pony was happily taking Deryn for a wander - she could hear his nervous giggle. This led her to the only possible conclusion that one could conclude (with such a lot of information and only a minuscule processing time allocated)...and that conclusion folded out as follows...
The warm, rough tongue dispelling slobber all over her little hand, must, in fact, belong to their designated welcome-crier...the goat. 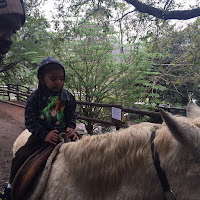 What a strange predicament to be met with.
Aunty Carron had always assured him that he had the most to say and the loudest voice with which to say it. But now he wasn't being allowed to say very much at all. The goat was back. And every time Deryn began to tell his new farmyard friend of his exciting farm adventures, the goat began bleating incomprehensible stories of his own. He wanted to tell the goat how he had braved the biggest ride of his life - atop a surely larger-than-usual pony...Or how he had helped milk the cow using his own two hands...Or even how he had climbed into a huge box on wheels and been towed around the farm behind a thundering tractor - holding tightly onto Aunty Carron's hand (so she wouldn't be too afraid). But the goat would hear none of it. He had his own stories to tell. Perhaps, thought Deryn, Winnie the Pooh really was right when he said:
"Some people talk to animals. Not many listen though. That's the problem."
Perhaps, for now, he would be one of those people who would just listen. Or perhaps he would just give this goat all of the feed in his hand, and then, while the goat was too busy eating to interrupt, Deryn would finally get to tell his very important story. 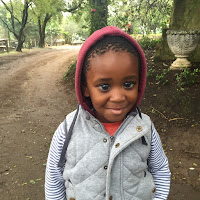 The cow seemed busy too. That was okay. He had already been the first to milk her. And the first to ride the little pony. Surely there must be a sheep wandering about somewhere. Mongezi narrowed his eyes and scanned the horizon for any sign of a patrolling sheep. He had feed left...and he planned to use it. With mature astuteness, he had worked out that if you timed things just right, the farmyard friends would let you run your hand over their glorious coats whilst they fed greedily from the other hand. He had petted the goat. He had petted the cow. He had even petted the little pony. Now it was the sheep's turn. But she was nowhere to be seen. His determined concentration was suddenly interrupted by a noisy oink. A very noisy oink. He spun around and concentrated hard to determine where the sound was coming from. His ears were working very well today. In no time at all he had located the pig pen and was moving towards it with a confident gait. The pigs sounded happy to see him...and his hands full of delicious feed. They bustled towards him hungrily. They were bigger than he had initially thought. And smellier. Upon closer inspection, they didn't seem too friendly either. Their coats certainly didn't look as nice to pet. But because Mongezi has a very kind heart, he thought that he must still feed the pigs - just as he had fed the goat, and the cow, and the little pony. It had been a day of firsts...he was very proud of that. And so today he would be the first to feed the pigs. He just wouldn't be petting them.

It had been hard to be patient. Especially when you are waiting for something so important. She took a deep breath and counted to ten, again. Sure, there had been plenty of lovely distractions along the way. Milking the cow had been lots of fun - especially when Uncle Jon had shown her how to squirt the warm fresh milk into her mouth. She had not tasted milk straight from the cow before - her's came from the fridge, from a white bottle with a picture of a cow on it. Not an actual, real-life cow. And she had shared a laugh when the bleating goat had given Lusanda such a fright. And she had really enjoyed feeding the sheep - it smelled of wet fur and fireplaces. She had even distracted herself by throwing feed to the rude, smelly pigs. Although she'd done this more to appease Mongezi - he had insisted that the pigs get fed too. All this wonderful distraction had led to this very important moment... 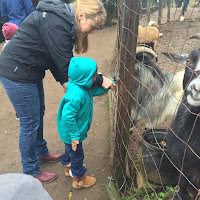 Lia could hardly contain her excitement as she spotted the little pony; Deryn perched awkwardly on its back, heading towards her. Soon it was going to be her turn! Her little legs shivered with anticipation. An excited giggle escaped from her mouth before she had time to push it back in. She looked around for confirmation. Uncle Jon's broad smile re-affirmed what she had already suspected...this was definitely going to be the best part of her day.

Christopher Robin had been very clear:
"You're braver than you believe, stronger than you seem, and smarter than you think."
But then again, Christopher Robin had just been hanging out in the hundred acre wood...he certainly had not been in this farmyard. In the hundred acre wood the scariest creatures were heffalumps and woozils...but in the farmyard there were hungry pigs, noisy goats and even a bleating sheep. And a definitely larger-than-usual pony.
Thobe had chosen not to milk the cow, nor to ride the larger-than-usual pony...and he considered these to be smart choices. He had held his breath and held on tight during the tractor ride...which made him feel very strong. But now came the part where he had to be brave. With cautious trepidation he approached the pen housing the noisy goats. Deryn was already there - habitually chatting away to an unsuspecting goat. With a deep breath, he reluctantly stretched out his hand and offered some feed to the closest goat. Even before he had time to think, the goat had greedily licked the pellets from his hand. That was not so bad. A cheer sounded from somewhere behind him. It was his friends...they had seen him being very, very brave. Thobe felt instantly happy. Perhaps that was the key, he thought as he reached out for Aunty Cally's hand. Perhaps you are braver than you believe, stronger than you seem, and smarter than you think, when you are in the company of your friends. And, like Christopher Robin, Thobe certainly had plenty of those. 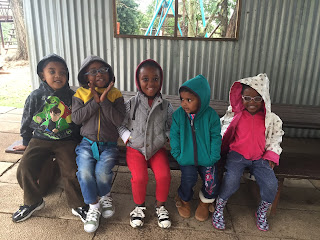 As always
waiting for our doorbell to ring
and new joys to come in
Cally, Carron and Corne

PS: a very special thank you to all the wonderful people who made our visit possible...